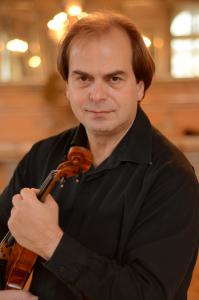 Barna Kobori was born in 1965 in Kronstadt (Brasov, Romania) and he has lived in Vienna since 1986.

Barna began his violin studies at the age of five, and graduated from the Music College in Cluj (Romania) in 1984. Following his graduation he became a member of the Brasov Philharmonic Orchestra, where he worked for two years. During this time he appeared as a soloist together with the orchestra and also performed at numerous recitals.

From 1987 until 1992 he studied at the Vienna University of Music with Prof. Günter Pichler (Alban Berg Quartet).

In 1987 Barna became a member ( principal and soloist) of the Vienna Chamber Orchestra. During this time he worked with great artists including Philippe Entremont, Sir Yehudi Menuhin, Sándor Végh, Sir Neville Marriner, Heinz Holliger , Heinrich Schiff and took part in many tours in Europe, USA, Japan and South America.

Since June 1998 Barna has been an associate of the Royal College of Music in London.

Barna was a lecturer at the Spanish Youth Orchestra JONDE as well as at the Jeunesse Camping in Salzburg. He is a violin and chamber music teacher at the Music School Klosterneuburg near Vienna.

In 1998 he formed the aron quartett together with Ludwig Mueller, Georg Hamann and Christophe Pantillon.