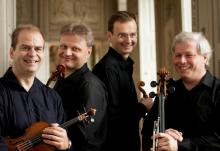 The aron quartett was founded in 1998 by Ludwig Müller, Barna Kobori, Georg Hamann and Christophe Pantillon, four Viennese musicians. Their artistic careers have been profoundly influenced by the members of the Alban Berg quartet along with Ernst Kovacic and Heinrich Schiff. Isaac Stern, Max Rostal, William Primrose, Mischa Maisky, Ralph Kirschbaum and Sándor Végh have also played critical roles in furthering their musical careers. The quartet made its debut in Vienna during the year of its foundation, and was highly acclaimed by press and public alike. Since then, the quartet has developed a wide-ranging repertoire – also in collaboration with Heinz Holliger, Heinrich Schiff and members of the Amadeus, LaSalle and Alban Berg quartets. During the year of its foundation, the aron quartett’s intention not only to tackle classical repertoire but also to devote itself to works by the second Viennese school led to an invitation to organize its own cycle of 18th, 19th and 20th century compositions as the quartet in residence at the Arnold Schoenberg Center in Vienna.

In 2001, the aron quartett made its debut at the Carnegie Hall in New York, and in 2002 at London’s Wigmore Hall and the Tchaikovsky Conservatoire in Moscow. In 2004, they made their debut at the Vienna Musikverein, where in 2007 they performed Korngold’s complete string quartets and his piano quintet in a four-part cycle. In 2008, the aron quartett founded the Laudon Castle Chamber Music Festival (www.schlosslaudonfestival.at). The quartet celebrated its 10-year anniversary in November 2008 with a very successful concert at the Vienna Konzerthaus. For 2009, the quartet again had an invitation to perform a Haydn – Martinu cycle in the Vienna Musikverein and a three-part Korngold cycle at the Opéra Bastille in Paris. In 2010 and 2011 the quartet participated in numerous festivals in Finland, Israel, Italy, France, Switzerland, Germany, Slovenia, Romania and Argentina.

The aron quartett’s first CD was released in 1999 and consists of works by Schubert, Schoenberg, Mozart and Ullmann. In February 2002, a concert by the aron quartett was broadcast throughout Europe by ORF (Austrian broadcast) for the EBU. Other CD recordings include string quartets by Franz Schubert (“Rosamunde” and “Death and the Maiden”, Preiser Records 90549) and a CD box with Arnold Schoenberg’s complete works for string quartet (Preiser Records 90572) for which the aron quartett received the Pasticcio Prize. The international press acclaimed this CD as one of the best recordings of 20th century chamber music. The outstanding interpretation and technical excellence of these recordings not only demonstrate the aron quartett’s exceptional competence but also set new standards. Cascavelle has released the piano quintets by Dvorak and Frank in a recording with Philippe Entremont. For the German label cpo the quartet has recorded the complete string quartets by Erich Wolfgang Korngold as well as the piano quintet with Henri Sigfridsson and in March 2010 the CD (“Paris-Vienne-Moscou 1910 - 2010”) has been released bv Preiser Records. In 2013 cpo published a second CD with works by Korngold (string sextet with Th. Selditz and M. Diaz & Suite op. 23 with H. Sigfridsson) and in 2014 the Kammermusikfestival Schloss Laudon released a recording with works by Schubert, Eisler, Shostakovitch and Horovitz. Another production with cpo label appeared in 2016: The piano quintets by M. Castelnuovo-Tedesco with the pianist Massimo Giuseppe Bianchi. 2019 Bruno Walter‘s String Quartet and Piano Quintet (M. G. Bianchi) will be released by cpo.