Schoenberg’s four (actually five) quartets document strikingly the composer’s development from youthful Romanticism via rootless atonality to a new Viennese Classicism of his own making. Several important recordings exist: this complete series’ main rival is the two-disc set by the Arditti Quartet (Auvidis), which breathes light and clear line into 20th-century scores and has the added advantage in Quartet no.2 of Dawn Upshaw, who gives a securer contribution than Anna Maria Pammer’s slightly shy offering here.

Like the Ardittis, the Aron Quartet, just five years old and quartet-in-residence at the spanking new Arnold Schoenberg Center in Vienna, includes the early D major Quartet. This astonishing teenage effort – like the exquisite, posthumously published Presto (a real find) and more diffuse Scherzo (destined for the early quartet) – reveals how lovingly Schoenberg studied the Viennese masters and, most audibly, Dvorak.

The players have learnt much from their chief guides, the members of the Alban Berg Quartet. The ensemble is (mainly) pleasing and the many piano moments are atmospherically charged. Some speeds might be amended; notable touches include the cello envoi closing the chirpy (and here, markedly uneven) second movement of Quartet no. 1 and the ensuing violin lead, the finale’s striking build-up and the eerie launch succeeding the Litany – featuring two poems by Stefan George – in Quartet no. 2. Yet although these dedicated players catch gloriously Schoenberg’s pre-echoes of Verklärte Nacht in no. 1 and even in the earlier quartet, it’s his innovative atonal passages in no. 2 that leave them most audibly at sea.

The Aron’s real triumph is in the last two quartets: Schoenberg may have become a dodecaphonist, but he remained a Romantic, and these are beautifully commanding, insightful performances that ride easily over difficulties, rendering the third and fourth quartets accessible by, and enjoyable to any listener. The recorded sound, although not uniformly well-balanced, is appropriately acerbic, giving these readings an argency akin to the Julliard’s. A highly satisfying achievement. 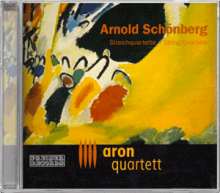